October 26, 2013
Compared to timber forests in the same growing conditions, bamboo can yield up to 25 times the amount of timber because it is ready to harvest so quickly. Some studies have found that bamboo can sequester four times more carbon and timber forests alone and at the same time releases 35% more oxygen than the timber forests, so there are many ecological benefits to bamboo growth (Brenner, 2008). 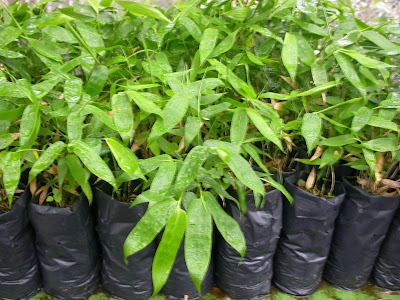 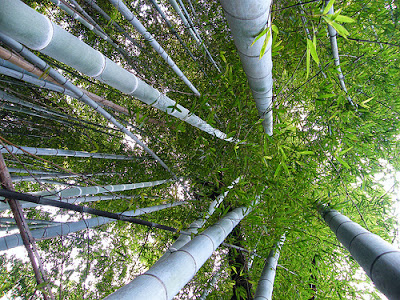 
Since bamboo can be used as a substitute of timber, it will also help decrease deforestation. Moreover, bamboo is highly sustainable as it can be regenerated within two to three years while timber could take longer than 25 years (FAO- NWFP-Digest-L, 2012). Biochar may be considered as a potential alternative to bamboo products as a durable carbon stock. 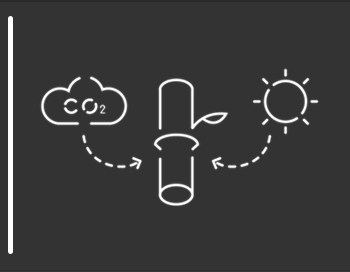 
Through a process of pyrolysis, up to 50% of the carbon can be transferred from plant tissue to the biochar, with the remaining 50% used to produce energy and fuels (Lehmann, 2007). Bamboo charcoal (BC) is one kind of manufactured biochar, a plentiful residual byproduct of the bamboo processing industry. BC has a highly micro-porous physical structure. 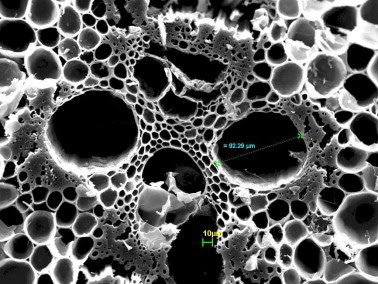 
The porosity is about five times greater and the absorption efficiency ten times higher than that of wood charcoal (Zhang, 2001). Bamboo charcoal may be an ideal amendment for nutrient conservation and heavy metal stabilization due to its excellent adsorption capability. 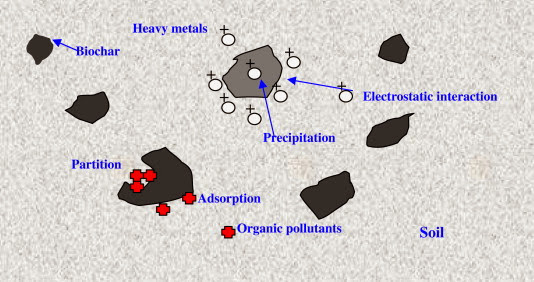 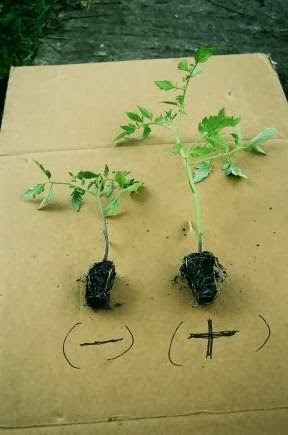 
The positive effect was related to the high adsorption capacity of biochar particles during composting (Dias et al., 2007). In a similar research made by (Asada et al., 2002), it was found that bamboo biochar was effective in absorbing ammonia in soils. This was attributed to acidic functional groups formed as a result of thermolysis of cellulose and lignin at temperatures of 400°C and 500°C (Lehmann and Joseph 2009). 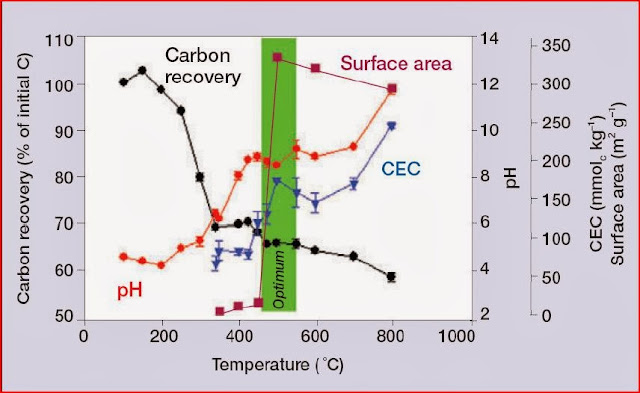 
Furthermore bamboo biochar has been used in studies in combination with municipal solid waste bottom ash as soil modifiers where the content of polyphenols released by the carbon matrix was measured, as well has been tested is combination with the same type of bottom ash as agronomic materials (Milla and Huang, 2013; Milla, Wang and Huang, 2013). 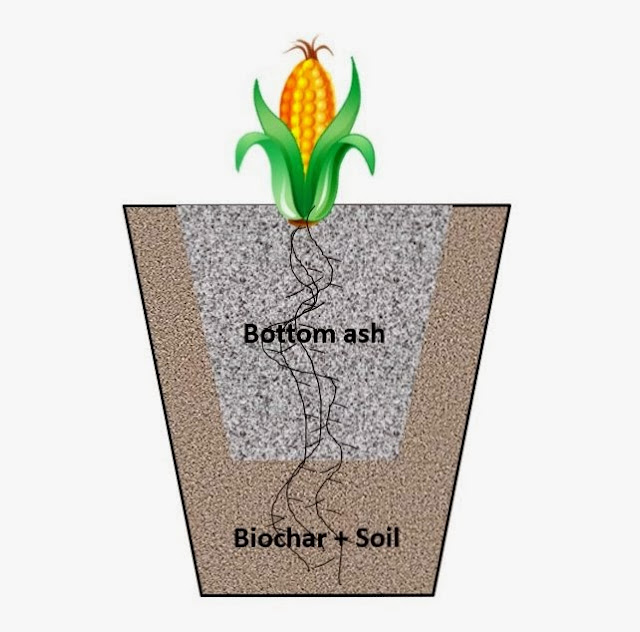 However, there has been no research to date on the effects of pyrolyzation temperatures of bamboo biochar in seed germination and plant growth. In a recent study presented by Solaiman et al. (2012), biochars made from ‘Oil Mallee’, Rice Husks’, ‘New Jarrah’, ‘Old Jarrah’ and ‘Wheat Chaff’ the authors concluded that biochar type and application rate influenced wheat seed germination and seedling growth in a similar manner in the soil-less Petri dish and soil-based bioassays that were performed. Germination and early root growth of mung bean and subterranean clover differed from that of wheat in response to the five biochars.

According to Rajkovich et al. (2012), the effects of biochar properties on crop growth are vaguely understood. For their study, biochar was produced from eight feedstocks and pyrolyzed at four temperatures (300°C, 400°C, 500°C, 600°C) using slow pyrolysis. In their results, animal manure biochars increased biomass by up to 43% and corn stover biochar by up to 30%, while food waste biochar decreased biomass by up to 92% in relation to similarly fertilized controls. Increasing the pyrolysis temperature from 300°C to 600°C decreased the negative effect of food waste as well as paper sludge biochars. 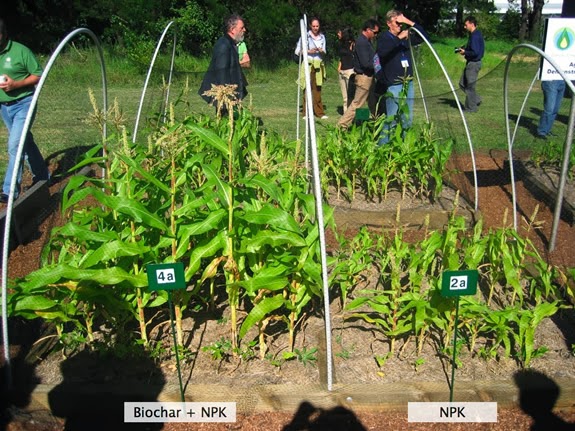 On average, plant growth was the highest with additions of biochar produced at a pyrolysis temperature of 500°C, but feedstock type caused eight times more variation in growth than pyrolysis temperature. Biochar application rates above 2.0% (w/w) (equivalent to 26t ha−1) did generally not improve corn growth and rather decreased growth when biochars produced from dairy manure, paper sludge, or food waste were applied.  In a similar study Free et al. (2010), used biochars made from biosolids, corn stover, eucalyptus, fresh pine or willow pyrolyzed at 550ºC  and incorporated into sandy loam at rates from 0 to 10 t/ha.
The results showed that any of the biochars affected significantly the germination or early growth (root and coleoptile length, and dry weight) of maize seeds. There were no interactions between type and rate of biochar with soil type. Their results suggest that biochar incorporation prior to a maize crop should be investigated as a method of increasing stable soil carbon with the potential for mitigating carbon emissions.

At temperatures above 400°C the lignin decomposes. This decomposition stage produces some bio-oil but the majority of the lignin remains as a solid and contributes heavily to the mass of the biochar product. Source: http://www.diacarbon.com/pyrolysis

We also proposed that the working mechanism of wood biochar and rice husk biochar in soil would be such that the decomposition of organic carbon in biochar to soil organic matter resulted in the increased water holding capacity and decreased silt of biochar-added soil (Milla et al., 2013). 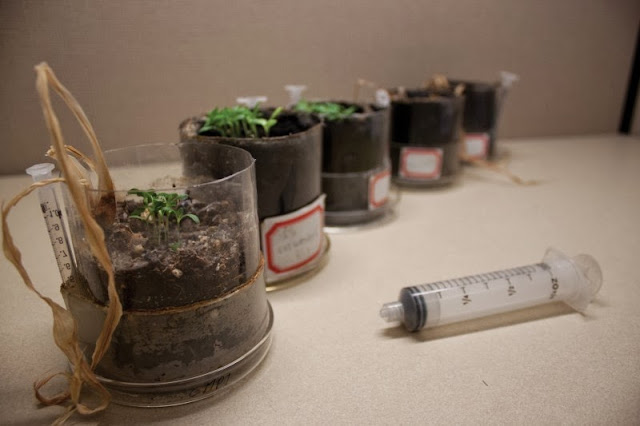 The main objectives of our study were to investigate the potential capability of bamboo biochar to affect germination and growth of edible crops. We hypothesize that the results of this study will provide practical information about which temperatures are the best to use in biochar production for future agricultural applications. 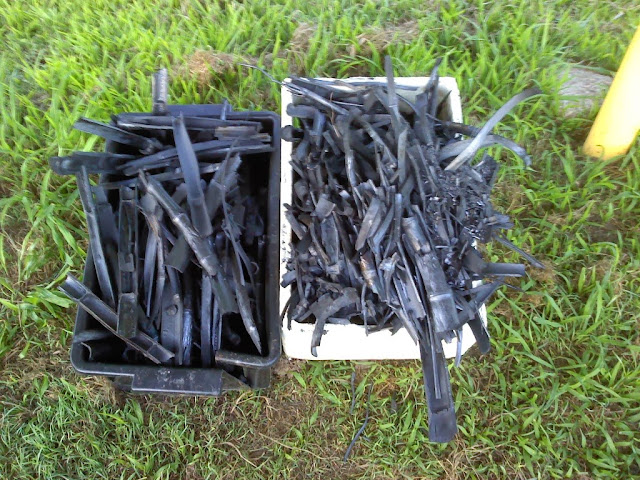 Popular posts from this blog

Structural and chemical composition of biochar

Thermal degradation of cellulose between 250ºC and 350ºC results in considerable mass loss in the form of volatiles, leaving behind a rigid amorphous C matrix. As the pyrolysis temperature increases, so thus the proportion of aromatic carbon in the biochar, due to the relative increase in the loss of volatile matter (initially water, followed by hydrocarbons, tarry vapors, H2, CO and CO2), and the conversion of alkyl and O-alkyl C to aryl C (Baldock and Smernik, 2002; Demirbas, 2004).
Source: http://venice.umwblogs.org/exhibit/the-conservation-of-venetian-building-materials/wood/
Around 330ºC, polyaromatic graphene sheets begin to grow laterally, at the expense of the amorphous C phase, and eventually coalesce. Above 600ºC, carbonization becomes the dominant process. Carbonization is marked by the removal of most remaining non-C atoms and consequent relative increase of the C content, which can be up to 90% (by weight) in biochars from woody feedstocks (…
Read more 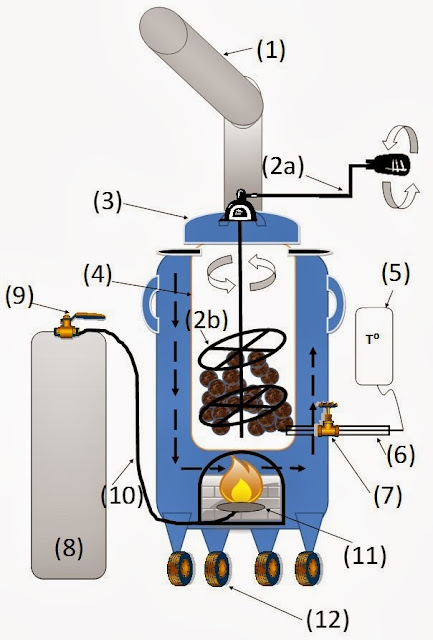 Our pyrolysis reactor designed for the production of biochar was handed for mechanical construction and assembly to a construction and assembly company in Pingtung City and was completed on May 2010. This reactor was used to produce part of the biochar needed for the characterization. Figure 1 shows a schematic of the batch pyrolysis reactor designed at the National Pingtung University of Science and Technology (Taiwan), and Figure 2 shows the built reactor.

This system was able to pyrolyze from 1 to 3kg of biomass (wood pellets, rice husk, and others) per run. The batch reactor vessel is a stainless steel horizontal tube with a diameter of 60 cm x 90 cm (Figure 2). The reactor was heated to temperatures between 250 and 350°C and kept at that temperature for 50 minutes to 1:30 hours, using a gas tank for fire feed.

Temperature is monitored using an iron temperature-sensing device that is inserted into open chamber of the drum to give accurate reading of the proceeding.  The …
Read more